My visit to the pink city of Jaipur chronicled in my blog post dated 14th October this year was preceded by a 3-day stay in Ajmer on some official work.  I had enough time to go round the city and its neighborhood, especially the well known Pushkar Lake. I found most of the sights rather disappointing and very much unlike what I was to see in the pink city just a few days later.  But on the last day (8th March 2005), I found an oasis in the desert in the form of the Mayo College campus about which I had known practically nothing.   When my local contact arranged this visit, I was expecting to see nothing more than a well known local institution, but what I actually saw took my breath away.   It was reminiscent of some of the sights in Oxford and Cambridge I had seen in distant England twenty years earlier.  As I later learnt, the Mayo College was conceived on the lines of the historic and venerable Eton College that I had seen across river Thames from the famous Windsor Castle near London on one uncharacteristically bright and sunny afternoon in mid 1985.
The Roots


Following the rude shock they received in 1857 in India, the British rulers realized the urgent need "to create a class of people - Indian in blood and colour but English in opinions, in morals and in intellect".  In this plan the Indian princely class who had remained silent spectators to the turmoil in 1857 was identified as useful allies and a ‘stabilizing’ force.  The Mayo College founded in 1870 and conceived as the Eton of India by Lord Mayo, the then Viceroy of India, was primarily intended for them. Today it serves a different purpose but continues to be the preserve of the elite class, the very rich and the super rich.
Present Status


The institution is not a college in the sense of the term as generally understood in India today.  It is a combination of secondary and senior secondary schools currently affiliated to the Central Board of Secondary Education (CBSE) in India.  It has an exchange programme with a number of premier public schools, including the Eton College, in the UK.  Spread over a vast area and housing a number of ancient heritage buildings amidst very rich greenery, the campus is a sheer delight for the nature lover.  Richly endowed with infrastructural and instructional resources, one of its best assets is a great museum housing a superb collection of antique items and armoury.
The Visit


I enjoyed the hospitality of the vice-principal who first took me to his home and then spent a considerable amount of time showing me almost all the places inside the vast college campus.  It was a bright and sunny day and I could indulge in my favorite hobby of photography to my heart’s content.  The pictures taken with my recently acquired Nikon E8800 camera and presented here constitute only a small collection of my catch that day.


The stunning main building of the college, completed in 1885, is in the classic Indo-Saracenic style of architecture and easily among a handful of such buildings in the country.  Here is a frontal view of this building, with a statue of Lord May in the foreground: 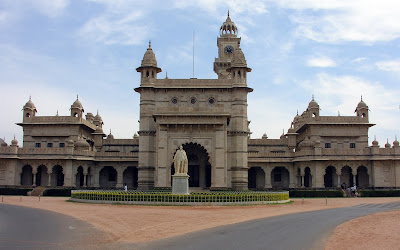 Here is a zoomed-in view of the entrance to the main building highlighting the Mayo statue: 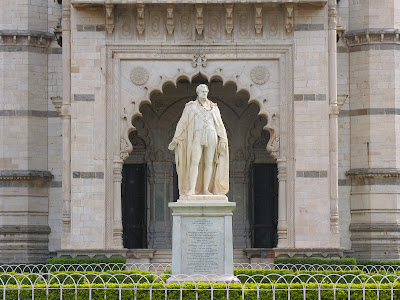 Here are two other views of the main building: 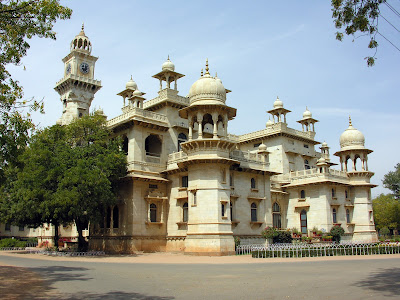 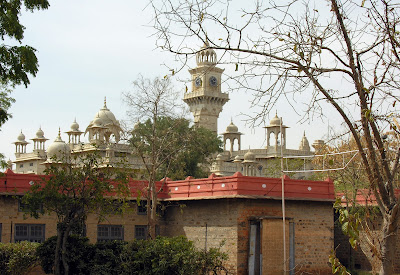 The most eye-catching part of the main building is the great clock tower (see below), with the clock showing the time at which this full-zoom picture was taken. 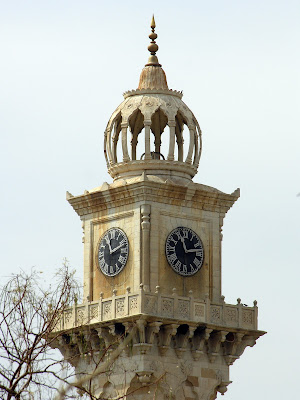 
The college consists of a number of ‘houses’ in contemporary architectural style.  Here are three of them, all surrounded by rich greenery: 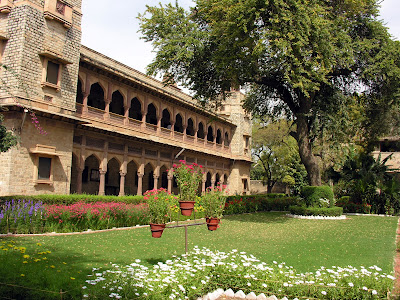 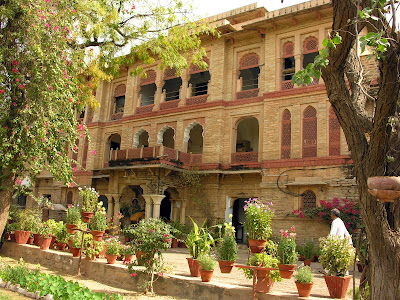 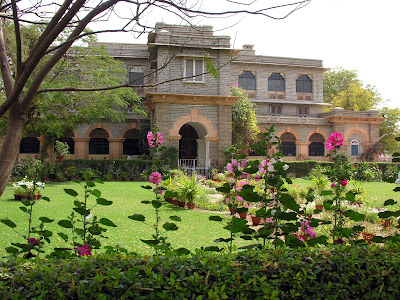 I like the next picture as much for the antique styled bench in the foreground as the rich greenery in the background.  This bench, made of long wooden strips held together by an ornate iron framework, appears to be as old as many of the houses in the campus. 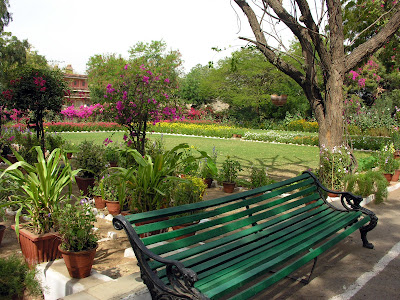 My memory took me twenty years back to the great London parks where I had seen benches of similar style and antiquity.  Here is the photograph of one such amazingly well preserved antique-style bench I remember to have sat on in Kensington Park, London, relaxing and contemplating the serene surroundings for well over an hour.  I found the Mayo College campus that afternoon equally serene and inviting even if the bench itself was not of comparable quality. 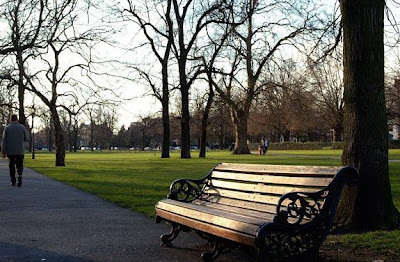 The following picture shows another one of the buildings in the Mayo college campus with a spacious lawn and some great trees in the foreground: 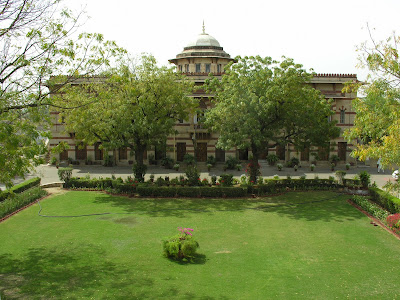 Here is another great building punctuated by beautiful all round symmetry: 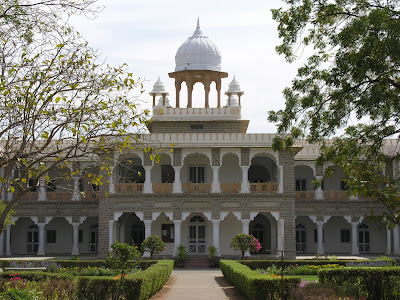 The classic style of the building in the following picture is somewhat spoilt by the trappings of modernity visible at the entrance. 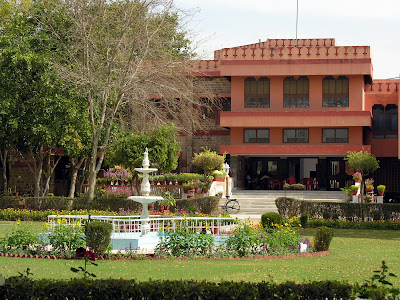 The temple seen in the following picture is of more modern origin and reminiscent in some respects of the Birla temple in Jaipur. 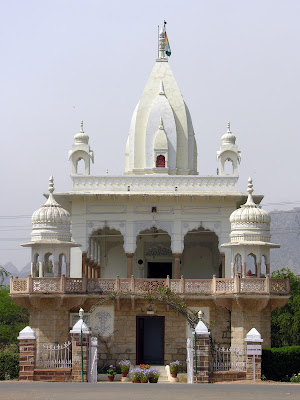 I wind up my photo album of the fabulous Mayo College campus with a picture of a recently constructed building housing additional classrooms for the expanding institution.  Though quite impressive, this doesn’t blend well with the rest of the campus architecture. 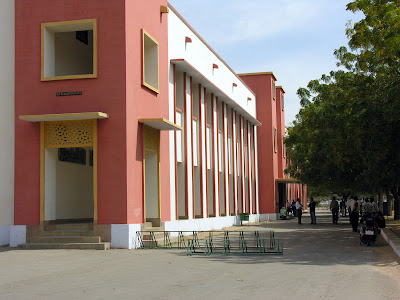 Thanks for these lovely pictures.

My father (Purushottam H Paranjpye) worked for this college just for a short time around 1955s.

He used to tell a story about this college. It was a famous 'college' during those days and attend children of rich people only. One high ranking bureaucrat met the principal of the college seeking admission for his child and was willing to pay 'whatever'.
He never got his child to study in the college. Even thought he could pay the fees etc. would his child be able to match the other children in terms of money they spent. A child of Maharajah went to the 'college' every day by his private ('chauffeur' driven) air craft? It was common for these kid to travel abroad - which was not so common in those days.
However, there was no compromise when it came to study and discipline.
There was an army camp near by and my father met another person there, right from Pune. This person used come on the horse back to visit my father. He retired, like may father about 25 years ago, as Col Hasabnis. Hasabnis uncle had fought in pak, china and later bangaladesh wars. His two son are now Brigadiers (they are from NDA).
Well when I saw the blog - all this flashed over - and hammered the key board.

Well written travelogue. I remember to have seen such benches in parks of Mysore in 60s

Marvellous!
The best photos I have ever seen of my old school.
Vikram Khanna
Mayo College Class of 1972

Dr S N Prasad
Mysore, Karnataka, India
Former Principal & Professor of Physics, Regional Institute of Education [NCERT], Mysore. Teacher Educator and Educational Consultant with over forty years of field experience. Actively involved in popularization of Science, including Observational Astronomy, through lectures, demonstrations and writings. Love travelling and photography, the two together leading to many travelogues and photo essays. Contributing substantial resources to distributed computing projects like GIMPS Prime95 and numerous BOINC Science Projects, including Seti@Home. Committed to practice and promotion of scientific temper, humanism and the spirit of inquiry and reform.